When Ben Hanten opened Ben’s Brewing Co. in 2005, there was not much demand from residents for craft beers or even knowledge regarding them.“I wanted to make craft beer interesting and create a culture around it,” he said. “Today, there is definitely a demand for and knowledge of craft beer in Yankton.”

Hanten has grown with that demand, opening a second Yankton location on May 30, called Ben’s Brew Station, at the former Freeman Company building, about a half mile north of the downtown location. The Station provides Hanten much needed room for larger brewing equipment, along with a bar area. It also includes space for further expansion as that demand continues to grow.

Back in 2005, Hanten had to find ways to interest and educate customers in craft beer through tastings, bus trips to other breweries and mug clubs. He opened The Copper Room in the upstairs space at Ben’s Brewing Co. as a speakeasy with an emphasis on craft cocktails with homemade ingredients. He weathered supply sourcing issues like hop shortages and a learning curve on equipment until he was able to get a proper system installed in the basement of the original location. Demand grew as the clientele became more enamored with his craft brews.

As much-needed brewing capacity followed, the former Freeman Company building gave Hanten the space necessary to install equipment to increase their production capability by 42%. Original plans centered solely on the brewery itself, but the possibility of adding a bar arose over the winter.

“I really was focused on the renovations needed for the brewery, but once I saw that first heating bill, the concept of including a bar quickly fell into place,” he said.

The Station’s opening was received with significant excitement, said Hanten, partially due to the unique nature of the tall ceilings, open space and large brewing equipment.

“There is a big sense of wonder for those who stop in or take a brewery tour, because they are not used to something like this in Yankton,” he said. “Customers state they feel like they are in Kansas City or other big cities.”

Just like Hanten’s growth, Yankton has made an extensive journey along the craft brew path as well. New generations of customers are curious and the town’s tourism has grown, creating a mix of customers who expect a certain quality of business. His products build on that expectation with local ties, like the most popular beer, West Side Park IPA, named after a nearby park, or Kelly’s Cove, a golden ale with a nod to the old park that used to be on the James River. The double IPA Mission Hill, is a reference to the small town by the same name northeast Yankton and Walshtown is a red Irish ale that harkens to the area’s Irish settlements.

Only about half of the space at the Station is used, but Hanten has plans for that too. He has ordered two more tanks that will triple their brewing capacity and is adding a canning line, so the business will be able to supply various new customers like gas stations, convenience stores and grocery stores with their canned products.

“We get constant requests for our beer from people in places like Vermillion and Sioux Falls, who we point to the establishments that pour our beers, but this will give them the opportunity to also buy them in cans,” said Hanten. “That equipment will help us expand our customer base.”

While locals enjoy both Ben’s locations, the fact it is drawing customers from outside the city has a special feeling as well.

“Since we opened in 2005, the business has been on a journey with Yankton and craft beer,” said Hanten. “That growth has been a fun journey but now, the fact that we are bringing people to our community is exciting for Yankton too.”

Looking back, Hanten said he is happy to be in Yankton because the people are eager for innovation and new businesses.

“I have seen small towns where the people feel they cannot support new and exciting businesses, but Yankton definitely feels like it is worthy,” said Hanten. “I would suggest to anyone with a new idea to go for it in Yankton, because the city’s customer base will support you here.” 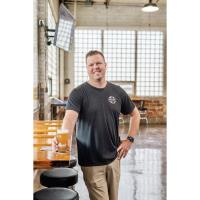